OUTOKUMPU in Swedish Avesta: ‘Safety is the top priority for our people’

With more than 800 employees at Outokumpu in Avesta, the company tirelessly works day in, day out, to produce high performance stainless steel in coils or sheets based on recycled scrap from Europe. During the production process, straps removal from stainless steel coils was causing a safety hazard when the straps were removed manually. Consequently, there were risks for injuries or pinching. For this reason, Outokumpu decided to invest in De-strappers and strapwinders, invented and made by Tebulo Industrial Robotics in 2017. And it paid off. Since then, the number of safety incidents has clearly reduced.

The steel manufacturer Outokumpu has a very long history in producing consistent, high-quality stainless steel. As inventors, and nowadays global leader, of this material they have 53 locations around the world, where they produced 2.2 million tons of stainless steel with over 10,000 employees in 2019. A very well-known site of Outokumpu, with centuries of experience in steel making and long traditions (as e.g. duplex was invented here), is Avesta in Zweden. Outokumpu´s production assortment on this site covers a wide array of corrosion-resistant stainless steels for highly corrosive environments and stainless steel products for specific applications or demanding end use applications.”

As in all manufacturing industries heavy jobs have been carried out manually over decades. Ola Modigs, Head of the Investment Projects at Outokumpu Avesta explains: „It’s no coincidence that safety and sustainability have been high on the agenda at our factory for many years, and no expense is spared to ensure that our employees may go home safely in the evening. For this reason, starting in 2017, Outokumpu has invested in the acquisition of De-Strappers and strapwinders to be able to carry out the removal of the tens of thousands of steel straps every year more safely, without the intervention of people.”

On a daily basis, the Avesta production site is supplied with over 3,000 tons of recycled scrap metal, transported in tens of trucks and trains. The material is preheated by using the energy of the off-gases. Subsequently, it is moved to the electric arc furnace where it is turned into liquid stainless steel. The liquid steel is casted into slabs by means of a continuous casting machine. Having undergone various surface treatments and passing through the ‘walking beam furnaces’, the slabs go to the hot rolling mill. As soon as the stainless steel slab has the required thickness, it is rolled up into coils and passed to the annealing and pickling line. For safety reasons, each coil of stainless steel is held together by several straps. Hans Spaans, Technical Director at Tebulo Industrial Robotics: „De-strappers of our organisation detect these straps and remove them fully automatically, handing them to a Tebulo strapwinder that converts the straps into a scrap package. Next, the resulting scrap packages are whisked away by a conveyor belt.” The pickling line removes the oxide film from the sheet material which prepares the blank material for the inspection line. At this point it is checked whether the surface treatments have been carried out sufficiently and/or whether there are any structural faults in the material. Once the material passes inspection, depending on customer demand, it goes to one of the three finishing lines or a combination of these three, further rolling the material out to the right thickness or cutting it into sheets. Next, the coils are rolled up for transport. Depending on the material’s strength, thickness and surface condition, conventional binding machines apply several steel straps per coil. When asked how many straps per month this amounts to, Modigs responds: „Converted in a round number, this amounts to approximately 15,000 pieces per month”.

‘Fewer pinching accidents and injuries thanks to the deployment of the De-strapper’.

Spaans explains that the five De-strappers of Tebulo Industrial Robotics are placed in various places in the process. „One of the five De-strappers moves back and forth on rails at the beginning of the annealing and pickling line between two so-called ‘coil cars’, to serve two production lines. This not only improved the production performance of both lines, it also enabled the operators to safely place the materials on both lines. The removal of the straps from incoming stainless steel coils happens on a turning table utilized for both lines.” Modigs says: „Having strip removal process automized has improved efficiency, but more importantly safety for the operators as they no longer have to climb onto the lines to manually remove the straps from the steel coils. Designing robots that could be integrated within these lines required detailed planning. The optimal solution turned out to be robots, which could be moved in and out of the production lines.” The last two of the five De-strappers are located on the production lines, each with their own safety fence. The implementation of the robots has resulted in a production increase.

The De-strapper is a robot system which over the full width of the coil detects the tie straps, cuts these and removes them to a waiting ‘strapwinder’. Moreover, this robot system also carries out other tasks, such as finding the ‘end tail’ and positioning it. The strapwinder collects and winds up the tie strap and compresses it into a scrap package. Next the package is transported by a conveyor belt to an available container. Spaans explains: „The first De-strapper was supplied to a pickling line in Canada in 2004. It was a hit. So in the same year they added a second De-strapper. Since then, technologically, the De-strapper has been further developed by our engineers. De-strappers of the latest generation are able to effortlessly cut and process the thicker and stronger tie straps of high strength steel. Upon demand, the De-Strapper may be equipped with various options. Just think of its scanning functionality for shape recognition of rolled steel, reel opening detection, a functionality for bar code scanning and/or a camera for access control or product number identification.”

When asked to what extent the installed De-strappers at Outokumpu have contributed to increased safety on the shop floor, Modigs responds: „The installation of these robot systems truly made a difference in our organisation. Since these systems were put into operation, we have been able to reduce the total recordable incidents (TRI) considerably. So the results were surprisingly better than expected, which is good news for our employees. For this reason, we decided for this solution at the time. The straps cut by the robots are no longer able to cause safety hazards, thanks to Tebulo’s patented innovative cutting and clamping mechanism that holds the straps in place with a stamp. With the investment in the robot de-strapping system, we have improved the yield of finished products, we have created more efficient processes in all process lines and, above all, we have improved safety at our workplace, which was our ultimate objective.” 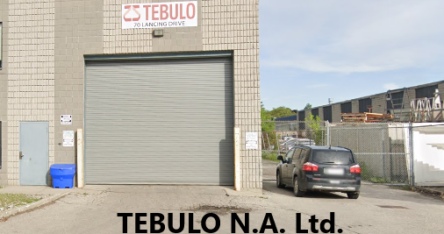