“A substantially higher production speed, as well as printing a marking of more characters on the flat and rounded sides of extremely hot rolls of steel, in less time”. Thus, the demands imposed by China’s leading steel producer when ordering the latest marker robot for their hot strip mill from Dutch manufacturing company, Tebulo Industrial Robotics. Or, in short: “Substantially improve the cycle time of our hot strip mill”. In this article, Hans Spaans, Technology Director of Tebulo Industrial Robotics, explains how he met this challenge in a country supplying 50% of the world’s total steel production.

With considerable speed, approximately 60 glowing hot rolls of steel (800° C), weighing 20 to 30 tons each are passing through, with their ‘eye to the sky’, on the ‘walking beam’ in the Chinese hot strip mill. Positioned beside the ‘walking beam’ is Tebulo Industrial Robotics’ latest marker robot. Within the traceability context, this robot applies a unique ID number to each of the rolls. For several decades and to the fullest customer satisfaction, Tebulo Industrial Robotics delivered marker robots to the leading Chinese steel manufacturer, annually producing 21 million tons of steel.

For over 20 years, the above production line had operated with a Tebulo marker robot. Spaans explains: “However, the robot had reached its technological end of life and needed to be replaced, as spare parts were no longer available. So this was the main reason for ordering a new marker robot”.

One by one, the robot prints markings on passing rolls, which appears simple. Yet, in practice it turns out to be a considerable technological challenge. Namely, on this production line, the exact position per roll is not defined: It is always an approximate position. Consequently there may be considerable variations in a roll’s position. Due to the extremely high temperatures and slight inaccuracies in the line’s drive system, the rolls of steel are not accurately positioned. As soon as the roll in need of marking stops, the robot must first detect where the marking should be placed on the roll’s side, as well as the roll’s exact position and height. In order to establish this, first a procedure to determine the accurate measurements must be carried out. Successfully performing the procedure constituted a major technological challenge, since it is all very time-critical.

The cycle time per roll amounts to 60 seconds. Per roll, only 25 seconds are available for the application of the marking and the measuring procedure, while merely 15 seconds are utilized for the actual measuring. In other words, the unique ID number has to be applied in the 10 remaining seconds. Spaans explains: “This was hardly feasible for the old robot, let alone with the new one. The standard for the latest marker robot was, namely, that it had to have the capability to maximally apply 25 characters at a time. On average, the application of 1 character takes 1.2 seconds. The smaller characters still take 1 second per character. Once the walking beam stands still, the marking is applied. The line comes available as soon as the robot finishes its procedure. While intending to solve these technological challenges, the producer intended to increase line performance as well. In short: More had to be accomplished in less time. So we needed to find a different, smart solution”.

In the old process, the line control system determined when the rolls of steel were stopped. There were no line data, speed and position data available. So the robot’s controller received a start signal from the line controller as soon as the line stopped. Next, the robot controller received the printable data. Before the marking could be applied to the roll of steel, the robot arm moved towards the steel roll in order to measure the diameter, position and height of the roll in a fixed pattern. Next, based on all of these data, the controller could plot the robot’s exact trajectory needed for the application of the marking’s received number of characters. Spaans explains: “Elaborating upon the old system, we have sought for a way to gain time somewhere. The idea emerged to optimize the measuring cycle by conducting it while the rolls of steel were in transport. Also, whenever feasible, process time could be considerably shortened by performing various measurements simultaneously, instead of one by one.

The measuring process consists of a combination of a distance laser and synchronization of line transport. Every 5 ms, the laser detects each roll’s contours by performing a distance measurement on the passing roll from a fixed position. The speed at which a steel roll passes is determined by accurately measuring the line movement with the assistance of the line transport sensors. By combining data derived from both measurements, the respective roll’s contours may be determined, as well as its exact stop position. Next, these data are sent to the robot controller which combines these data with the fixed, known distance to the walking beam, in order to calculate the roll’s position and particularly the location of the arch on which the marking needs to be applied. Moreover, the known information is that the rolls are accurately positioned within +/- 200 mm. The rolls are perpendicularly placed on the line by means of a tilting system with an allowable positioning accuracy of +/- 150 mm. In other words, based on the available information, the robot’s controller easily plots the exact trajectory in which the marking needs to be applied. No additional measuring is required in the described approach, aside from the roll-height measurement, saving approximately 10 seconds per roll. When asked whether the height measurement might also be included in one pass, Spaans responds: “No, a height measuring process is necessary under all circumstances. This is because not all rolls of steel are identical, while the marking position, as seen from the top down, must always be identical. The height measurement also helps to determine whether the roll has a case of telescoping. This measurement performed on the roll’s flat side is a tested and approved measuring approach. In a case of excessive telescoping  the marking is only printed on the roll’s rounded side.

On average, every 3 to 6 weeks, during a regular maintenance stop, the robot receives any necessary maintenance. If the rollers of the hot strip mill have to be replaced, then the line with the rolls of steel needs to be emptied. Consequently, the line transport speed changes. In the controller’s new configuration, this does not at all impact measurement accuracy. Just as previously, the customer decided again for a single nozzle for the latest marker robot. A seven-nozzle dot matrix is faster in applying a marking. However, the single-nozzle design is much less sensitive to pollution within a hot environment, so it has a better performance output than the dot matrix. The white paint utilised for the marking’s application was fully developed in-house by Tebulo Industrial Robotics. The paint can easily be refilled while the robot is in operation, since the paint supply system sits outside the safety fence surrounding the robot.

Concluding, Spaans says: “Meanwhile, Tebulo Industrial Robotics has placed several marker robots, as described above, in hot strip mills worldwide. We were able to accomplish a considerable time savings per roll, particularly by integrating data from line and robot control in conjunction with parallel implementation of various measurements. This benefits the line’s eventual performance as well as TCO. 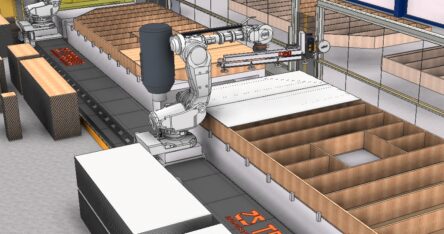